Where Do We Find Solar Energy

Where do we find solar energy? Solar energy is the energy emitted by the sun usually refers to the part of it that reaches Earth or artificial bodies that are in the orbit around it.

Solar energy originates in nuclear fusion processes that occur within the sun. These processes release a huge amount of energy, which makes its way to the surface of the sun and is projected into space at all wavelengths of the electromagnetic spectrum, but mainly at wavelengths of visible and sub-red light.

The infrared radiation that reaches the atmosphere of the Earth causes its warming, but to a relatively small extent. More important is the contribution of visible light that harms the earth’s surface (land and sea) and is returned from them; In the process of return, much of the visible light becomes sub-infrared radiation, leading to global warming and the atmosphere above them.

This energy is the driving force of the global climate, which gives life to all organisms, in two main ways: First, life as we know it can only exist when the water is in the liquid state; It is the energy of the sun that makes it possible: if it were smaller, the water would be in a solid state (like ice), and if it were higher, it would evaporate into gas (water vapor). Second, solar energy drives the process of photosynthesis, which is absorbed by different plants and mono-cells and converted to other forms of energy, chemical, which can consume other creatures.

In other words, solar energy is the source of life in our world. It is also the source of most other forms of energy that we use for our purposes.

Where Do We Find Solar Energy?

The amount of solar energy our earth receives every day is several times greater than the total amount of energy we can consume. However, on the surface of the earth, solar energy is inconstant and the source of energy is changeable. The amount and the intensity of sunlight vary by both time and location. In addition, climate conditions affect the sunlight availability on a daily and seasonal basis.

Solar energy is the third most important renewable energy source( after hydro and wind) in terms of installed capacity in the world. The global growth of photovoltaics shows exponential curve between 2007-2017. During this time, solar PV has evolved from a niche market of small-scale applications to a popular power source. In 2016, photovoltaic capacity increased by at least 75 GW, with an increase of 50% on an annual basis of new facilities. Cumulative installed capacity has reached at least 302 GW by the end of the year, enough to provide 1.8 percent of total world power consumption. 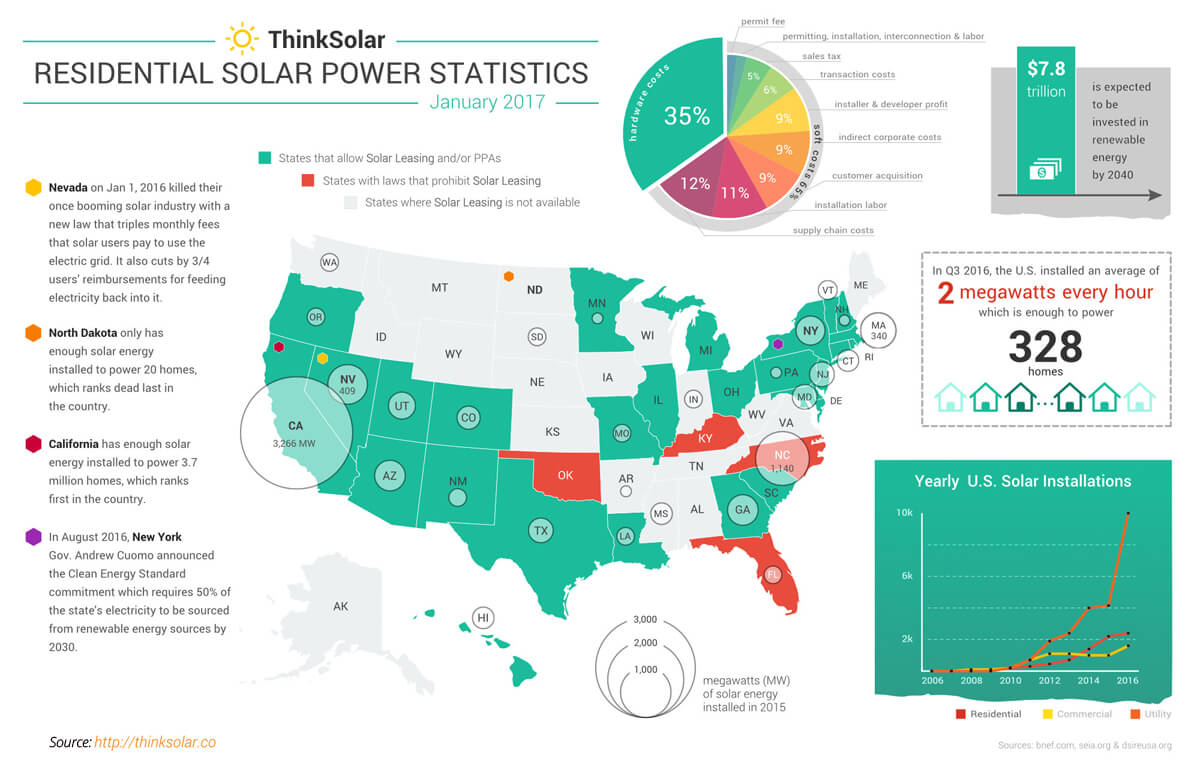 This energy has two main advantages: solar energy systems do not produce air pollutants and do not emit carbon dioxide; And when placed in buildings, they have minimal impact on the environment.

In addition, there are home systems of solar energy, which help in the production of household electricity and save money.

The main drawbacks of solar energy include:

Limit the amount of energy – since the sun does not provide a significant amount of energy anywhere at any given time, and requires a large surface area in order to collect the energy in sufficient quantity for widespread use.

Where are the solar energy resources?

Solar energy exists abundantly all over the world, but not every place will be suitable for solar panels, solar thermal collectors or other means of converting sunlight into usable energy.

$824.99
SAVE WITH THIS COUPON
Categories